(Angelo sums it up nicely in this video, though his others can be misleading.)

Life seems pretty miserable, doesn't it? You have a few birthdays, you try to satisfy desires as they arise, and before you know it, your health is declining, and then you die. If you are religious, at least you hope to go to heaven. But what are the chances you chose the one true religion? Each one claims to be the only true one, and they all demand blind faith (with Buddhism as somewhat of an exception).

But the one thing that almost nobody seems to consider is that they may simply be seeing reality incorrectly. In reality, everything functions perfectly according to natural laws. This perfection can only know itself when it’s realized that you and I do not exist.
Sorry tho, that’s not an excuse you can use to get away with anything.​​
For some strange reason, when confronted with this realization, people often assume that their choices are meaningless, when in fact the opposite is the case. Precisely because each choice affects future conditions & future choices, each choice is important in shaping the future, tho it happens automatically. There is no “self” that exists outside of reality (aka the web of conditions) to influence reality. The most powerful choice to make is the choice to meditate on and contemplate this truth of Dependent Origination, for it leads to liberation from the dream of identity.

The next problem that people run into is imagining that they must exist as simply the awareness of what is going on, since they are now convinced that everything is happening automatically. That's a frightening idea, that one is trapped as some type of powerless observer. But thankfully, it is just another illusion.


Proof #1: Everything happens due to conditions. Think about that. Imagine what it would mean for that to be falsified. Could something happen without any supporting conditions? No, of course not. This is common sense. You can't put your pants on if there are no pants or legs to put in the pants.

The very strange thing is, this common sense is ignored so that we can feel as if we are independent agents able to make choices which are not dependent upon conditions (aka “Free Will”). Obviously, choices are made. But how? What causes one choice vs another choice? If it were random, then nothing would make any sense at all. But even if it were random, that still wouldn't help us feel as if our choices are truly our own.

We don't know our next thoughts until we think them. We don't decide which desires will surge up. And even if we did choose desires and thoughts, there would be conditions leading to those choices. Even a creator God, choosing to create the universe, is subject to the same lack of free will as any other so-called "being." Free will itself is a logical impossibility without even a coherent definition.

Proof #2: Let's look at direct experience: sensations, emotions, and cognitive experiences like thoughts and other states of mind. Looking closely at these aspects of direct experience, is there any witness (self) to be found in any of it? Or is the sense of witnessing simply a conceptual overlay that integrates the various streams of perception? When seeing, is there truly someone experienced to be seeing, or is there only the seen? When a thought appears, "I am seeing," is it just a thought that links thoughts, or is it pointing to some real “self” somewhere that is seeing?

Reality is witnessless/backgroundless, disjoint, center-less, infinitely interpenetrating self-known timeless processes/suchnesses; it is not unified nor is it subject & object. It is maddening to ignore the truth!

With practice at not hiding from the logical truth, many "people" even today have managed (to varying degrees) to get over the delusion that the conditioned sense of self points to a truly existing self, and thus have overcome stress & the illusion of birth and death caused by unification (allowing for identification) of disjoint experiences.
Here is how anyone can experience reality/liberation/unbinding/nibbana right now: imagine that each atom which makes up your body (as well as outside) is in love with each other one. They are afraid to show it while you are watching, so just imagine you're gone, and then they will each have their own experience of perfect love and peace. Remember that all atoms always function perfectly according to natural laws.

Remember: You are not the center of the universe. There is no center, nor background, except an imagined one.

Popular posts from this blog

No, Buddha did not preach True Self (atta, atman) in disguise as anatta. 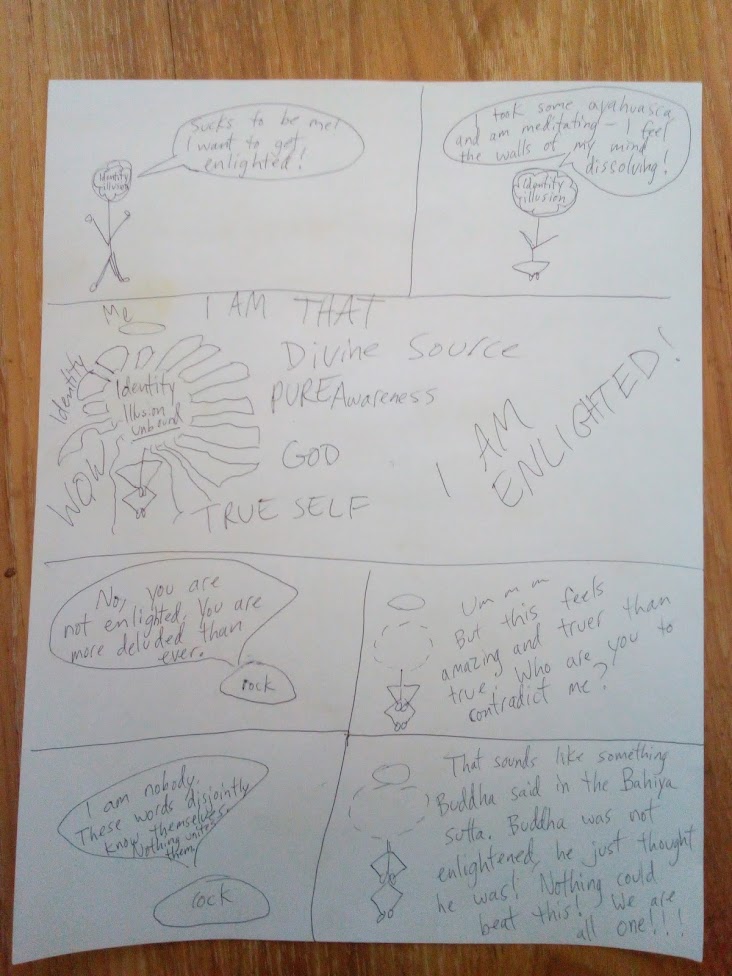 I often come across people who claim that Buddha was just rehashing Hindu teachings in a weird way. But this is due to a flawed mode of inquiry . Buddha actually preached (as in MN 38 ) the opposite of Advaita/True Self/Universal Mind/Ground of Being/Divine Source, but if you have not gone beyond the Advaita realization yet, then there is no way for you to understand it. Most practitioners, including even some Buddhist "masters" (mostly Mahayana ones) have fallen into the Advaita trap of True Self (Atman) and think that is what Buddha meant by anatta. I originally also was in that trap, but thankfully after studying Thusness Six Stages of Awakening  and the Bahiya Sutta , and speaking with Soh Wei Yu of awakeningtoreality.blogspot.com , I managed to get past the Universal Mind stage and dissolve into actual nibbana (as it is described in Bahiya Sutta). Nibbana is infinitely disjoint--total opposite of One Mind/Cosmic Consciousness. Imagine if you will every single atom/flow o
Read more